Ambitious plans unveiled for a libertarian city in the metaverse 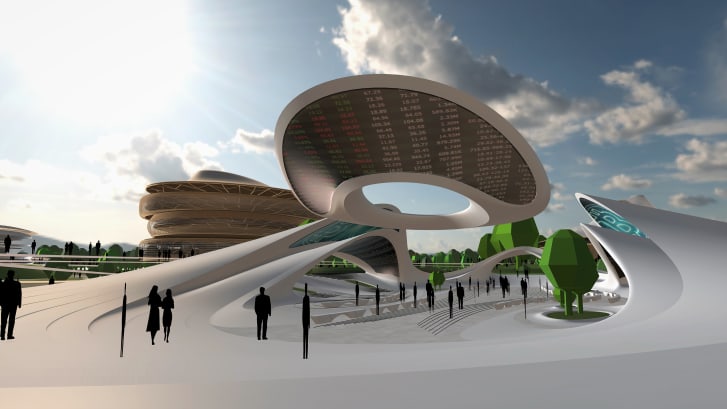 One of the most prominent architecture firms in the world is designing a new metaverse — a virtual city that hopes to be a libertarian utopia.Zaha Hadid Architects (ZHA) has revealed renderings of the “cyber-urban” Liberland metaverse, a small virtual city made of futuristic, curving buildings in the architectural style that made the late architect’s firm famous. When complete, it will offer users the ability to traverse the hub as an avatar, and feature a city hall, collaborative working spaces, shops, business incubators, and a gallery for NFT art shows. The community it hopes to foster will have a focus on self-governance as well as fewer rules and regulations.

Those ideals are based on the so-called Free Republic of Liberland, a real-life micronation founded by Czech politician Vit Jedlicka in 2015 with a goal to implement small government libertarian values. Wedged between Serbia and Croatia, the 2.7-mile territory, which is larger than the Vatican and Monaco, is a disputed land and claimed by neither country. Since its founding, no one has moved to Liberland, which lacks any infrastructure, nor has construction started in earnest. But it does have 7,000 approved residents and 700,000 applications, according to Jedlicka, who told CNN in an email. The micronation also has a national flag, anthem and currency — the cryptocurrency Liberland merit.At the time of its founding, both Serbia and Croatia dismissed the micronation in statements to CNN, with the Serbian Ministry of Foreign Affairs saying they considered it “a frivolous act which needs no further comment.” Liberland has not been recognized by any other nation.

But now the micronation is hoping to stake its claim in the virtual world. Metaverses, which are often built using blockchain technology, are an ideal space for libertarianism ideals to thrive, according to ZHA principal architect Patrik Schumacher, because of the political philosophy’s shared goals of decentralization and autonomy. He has been interested in Liberland since it was founded in 2015 and soon after attended his first conference.”It’s a very lively scene of contributors…a lot of IT and crypto and tech entrepreneurs who find the world too restrictive,” he described.

Though many metaverse concepts have been born out of video game aesthetics — Mark Zuckerberg’s concept for a Metaverse, for example, looks similar to Nintendo Wii’s avatar design — the digital architecture of Liberland is meant to be more grounded in reality. The buildings, while hyper-futuristic, are similar to the glossy look of typical architectural renderings. But they were made with parametric design — a method that employs algorithms to create complex forms.

“I believe the metaverse is not a fantasy world. It’s not a video game,” Schumacher said. “(Liberland metaverse’s architecture) is unusual and unique, but at the same time is realistic with respect to the kinds of architecture we have built already and which will be coming.”However, he added, there is more freedom in virtual design. The renderings show the firm’s ability to push the boundaries of what they could achieve with physical buildings, from impossible features like hovering rooftops, to vast interiors that don’t have to factor in considerations like energy efficiency. Schumacher is also excited about the possibility of adaptive environments, with rooms like auditoriums that can expand based on the number of users in them.

The metaverse directly references the real world, mimicking the same borders of the Free Republic of Liberland. One of the main draws of the project will be its system for virtual and physical land ownership, with digital stakeholders owning a part of the terrain as well. But those details are still being ironed out, Schumacher explains.”It might be a proportion; it might be a particular piece of land — we haven’t fully worked it out,” he said. “But we like that integration of virtual and real land. And that’s one of the core premises of the project.”