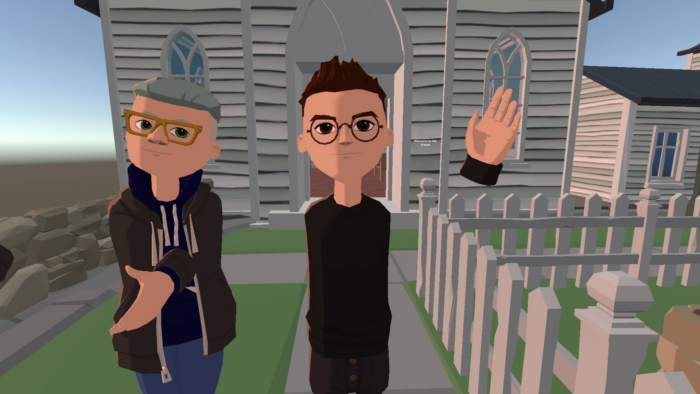 [Episcopal News Service] Your Zoom church? It’s so 2020. This year, Episcopal liturgies are about to enter the metaverse.

The metaverse is the term increasingly applied to experiences in virtual reality, or VR, in which users wear internet-connected headsets and manipulate hand controllers to immerse themselves in an entirely digital world. A team led by Episcopal clergy is developing a church space in VR called Web3 Abbey, and they plan to welcome the first worshipers to their avatar-friendly liturgy on Feb. 28.

So, what will an Episcopal liturgy look like in the metaverse? “I can’t answer that,” said the Rev. Sean Steele. It’s still a work in progress, he told Episcopal News Service this week, but its baseline will be “a special liturgy that is prayer book-rooted” and customized for a VR experience. “The paradigm-shifting question is, what would an Anglican space look like if we were creating it here?”

This kind of virtual church will bear little resemblance to the video-based online worship services that became familiar to many Episcopalians during the pandemic as a safer substitute or alternative to in-person worship. Attending a VR church has been possible for several years, thanks to some trailblazing pastors, but the VR experience has only recently gained widespread attention, with big tech companies like Facebook and Microsoft investing billions of dollars on the technology.

“The future of the church is the metaverse,” D.J. Soto, who founded VR Church in 2016, told Religion News Service in January. “It’s not an anti-physical thing. I don’t think the physical gatherings should go away. But in the church of 2030, the main focus is going to be your metaverse campus.”

Steele, a church planter like Soto, leads the Episcopal development team with financial backing from TryTank Experimental Lab, a joint project of Virginia Theological Seminary and General Theological Seminary. He said he already was thinking of launching an online church last year and began focusing specifically on the metaverse while on a summer sabbatical.

When he returned in September, he pitched the idea of a VR church to Rev. Lorenzo Lebrija, TryTank’s director, who agreed to help purchase the equipment needed for the experiment, particularly an Oculus Quest 2 headset, which costs about $300. Through a Facebook-hosted interface in the headset, Steele began exploring VR worlds by just “wandering around.”

As vicar of St. Isidore’s Episcopal Church in Houston, Texas, Steele, 43, has successfully launched and grown nine missional communities in the past six years, but he’s a self-acknowledged neophyte when it comes to VR.

“I was in this space for a month, and I realized, I’m not figuring this out by myself,” he said. “The intuitive leap is so big.”

TryTank helped Steele recruit a team of 11 tech-savvy volunteers. Last fall, they began meeting twice a month to share their exploratory experiences with VR and to discuss what an Episcopal space in that world might look like. One of them, the Rev. Joshua Barrett, a priest in the Diocese of Rochester, joined Steele as co-manager of the VR experiment.