How Facebook’s ‘metaverse’ became a political strategy in Washington 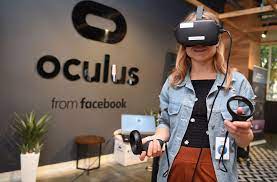 This summer, executives at Facebook confronted a daunting task. Years of controversy over its role in spreading misinformation, abusing privacy, crushing competition and undermining democracy had left the Facebook brand a shambles. The company needed a new identity.

Thus began Facebook’s push for the “metaverse,” a virtual world made possible by what it hoped would be exciting new hardware. In the metaverse, according to Facebook chief executive Mark Zuckerberg, people could play games, exchange cryptocurrency payments, attend meetings — and, perhaps most importantly, see Facebook as cool again.

In recent weeks, Facebook has unveiled ambitious plans to pitch its virtual reality headsets as tools for remote work for professionals and launched a collection of smart glasses in collaboration with Ray-Ban, an icon of American hipness. Part of the Facebook campaign to rebrand itself as a purveyor of gee-whiz technology: Nascent plans to build a medical device, according to two people familiar with the company’s plans who spoke on the condition of anonymity to discuss private matters.

Facebook’s buzzy hardware push is not just a PR stunt, it’s an elaborate effort by Zuckerberg to transform the company into a passion project that exists far from the controversies of social media. It is a political strategy too, part of a broader pushto rehabilitate the company’s reputation with policymakers and reposition Facebook to shape the regulation of next-wave Internet technologies, according tomore than a dozen current and former Facebook employees, think tank experts, legislative aides and Biden administration officials who spoke on the condition of anonymity to discuss private conversations.

In Facebook’s Washington, D.C., office, the metaverse is already a full-on political push: The company is meeting with think tanks to discuss the creation of standards and protocols for the coming virtual world, enabling Facebook, some say,to turn the conversation away from such urgent but distasteful matters as the massive antitrust lawsuit filed last year by the Federal Trade Commission. Next week, Facebook Vice President for Global Affairs and Communications Nick Clegg plans to deliver a talk at the Atlantic Festival, a Washington-based ideas fest funded in part by the social media giant, titled “Journey to the Metaverse.”

Meanwhile, Clegg and Sheryl Sandberg, the company operations chief, have become the company’s lead promoters in Washington, standing in for Zuckerberg, who has told aides he no longer wants to be involved in such matters. And back in Silicon Valley, Zuckerberg this week replaced his chief technology officer with Andrew Bosworth, a close friend and the company’s longtime head of hardware — a move that underscores the hoped-for transition from troubled social media company to futuristic tech provider.