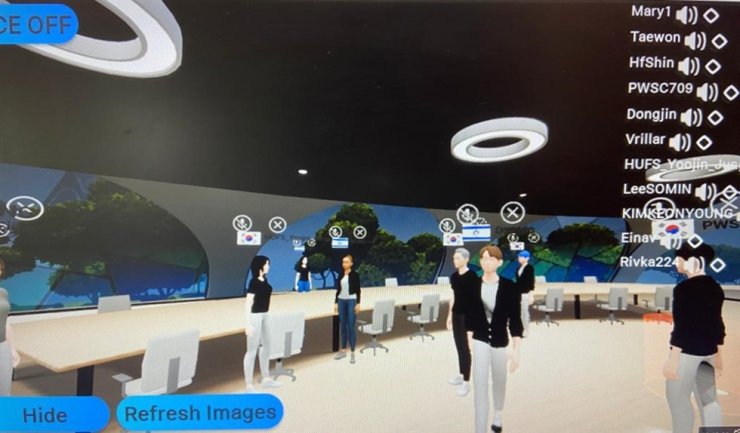 The Embassy of Israel in Korea was the first to establish a virtual embassy in the metaverse last September and the virtual space is stepping up as a platform for language and culture exchange between Korea and Israel.

Earlier this month, the students of the Korean Studies Program at the Hebrew University of Jerusalem and the Hebrew class at Hankuk University of Foreign Studies (HUFS) met at the metaverse embassy to exchange conversations.

Each student created their own avatar and navigated through the pavilion to reach the E=MC2 conference room on the second floor, where the gathering was held.

The meeting was organized by Irina Lyan, head of the Korean Studies Program at the Hebrew University of Jerusalem, Shin Seoung-yun of HUFS and the Israeli Embassy in Seoul.

The Israeli Embassy is pleased with the successful utilization of the metaverse and hopes to make it a platform to promote more exchanges between the two countries.

“The avatars gave the feeling that the students are actually in the same room together, it was incredible to see how fast they got used to the metaverse platform and how confident they were during the presentations. The eight thousand-kilometer distance between Israeli and Korean students dropped to zero with this new platform,” Rasha Atamny, deputy chief of mission at the Embassy of Israel in Korea, told The Korea Times.