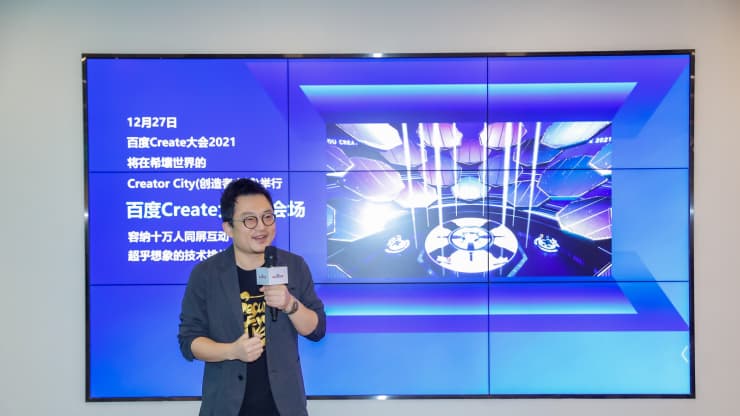 BEIJING — While metaverse hype has swept the world this year, one of China’s tech giants in the game has revealed a version of the virtual ecosystem that’s underwhelming so far.

The metaverse can be loosely defined as the next generation of the internet — a virtual world in which humans interact through three-dimensional avatars. Social network giant Facebook jumped into the trend in October, changing its name to Meta and announcing plans for $10 billion in related investments in the next year.

China is similarly abuzz with metaverse headlines. Beijing-based Baidu plans to hold its annual developers’ event Monday in the virtual world of its metaverse app, XiRang. The company claims it will be China’s first metaverse conference.

However, at a preview event Tuesday, the executive in charge of XiRang downplayed expectations by noting how many aspects weren’t yet up to par.

Development of the app began last December, but it is still “negative six” years to full launch, Ma Jie, a vice president at Baidu, told reporters in Mandarin. In response to questions such as one asking for details on that timeline, Ma struck an apologetic tone: “That’s a very good question, but I may not have a very good answer.”

He said Baidu aims to build an open-source platform for metaverse developers — an infrastructure for a virtual world.

Monday’s event marks the opening of XiRang to developers, primarily in China for now.

“The metaverse, while a buzzword in the global tech and investment community, is still very much in its infancy,” Brian Tycangco, analyst at Stansberry Research, said in email. “A lot of people don’t even fully understand what the word means today or will mean in the next 3 to 5 years.”