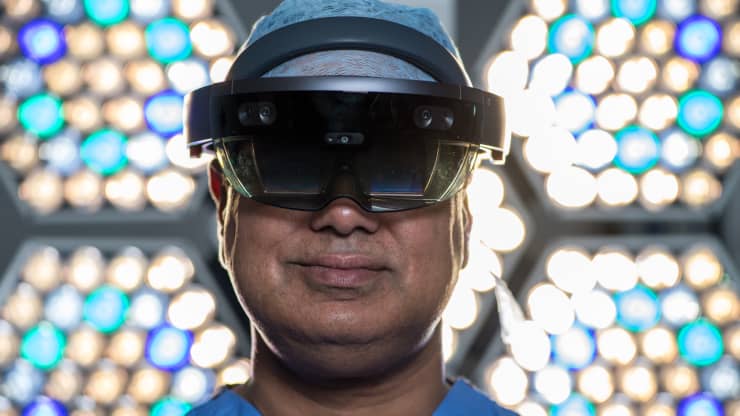 The metaverse, the digital world’s Next Big Thing, is touted as the internet domain where animated avatars of our physical selves will be able to virtually do all sorts of interactivities, from shopping to gaming to traveling — someday. Wonks say it could be a decade or longer before the necessary technologies catch up with the hype.

Right now, though, the health-care industry is utilizing some of the essential components that will ultimately comprise the metaverse — virtual reality (VR), augmented reality (AR), mixed reality (MR), and artificial intelligence (AI) — as well as the software and hardware to power their applications. For example, medical device companies are using MR to assemble surgical tools and design operating rooms, the World Health Organization (WHO) is using AR and smartphones to train Covid-19 responders, psychiatrists are using VR to treat post-traumatic stress (PTS) among combat soldiers, and medical schools are using VR for surgical training.

Since Facebook — now Meta Platforms — acquired Oculus and its VR headset technology in 2014 for $2 billion, numerous health-care applications have been developed. One of the latest was a collaboration with Facebook Reality Labs and Nexus Studios and the WHO Academy. The organization’s R&D incubator designed a mobile learning app for health workers battling Covid-19 worldwide. One of the training courses involves AR to simulate on a smartphone the proper techniques and sequence to put on and remove person protective equipment. With content available in seven languages, the app is built around the needs expressed by 22,000 global health workers surveyed by the WHO last year.

Oculus technology is used at UConn Health, the University of Connecticut’s medical center in Farmington, Connecticut, to train orthopedic surgery residents. Educators have teamed with PrecisionOS, a Canadian medical software company that offers VR training and educational modules in orthopedics. Donning Oculus Quest headsets, the residents can visualize in 3-D performing a range of surgical procedures, such as putting a pin in a broken bone. Because the procedure is performed virtually, the system allows the students to make mistakes and receive feedback from faculty to incorporate on their next try.