Why Frances Haugen Is ‘Super Scared’ About Facebook’s Metaverse 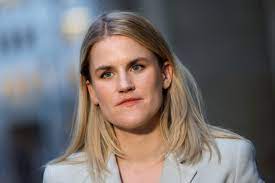 My friend and colleague Billy Perrigo has long written about the perils of Big Tech: how it spreads misinformation, fosters extremist networks worldwide and even threatens democracy. Last month, Billy traveled to Paris to interview the Facebook whistleblower Frances Haugen for the cover story of our Dec. 6 issue. He talked to Haugen about a wide range of topics, including Facebook’s version of the metaverse—but that part of the conversation didn’t make it into the issue. So this week, I’m handing the newsletter over to Billy for more on his conversation with Haugen. —Andrew R. Chow

In a glitzy October keynote presentation, Facebook CEO Mark Zuckerberg appeared as a cartoon avatar informing us that someday, the way we interact with our friends, work with our colleagues and relax in our spare time will no longer just happen in real life, nor on 2D social media platforms like Facebook or Instagram. Instead, we will inhabit a 3D virtual world with endless possibilities. The mission of Facebook—now Meta—would be to build that world, Zuckerberg said.

So when I traveled to Paris to interview Frances Haugen in mid-November, the following questions were on my mind: Would Facebook succeed in its quest to shed its toxic brand? Would people be happy to forget about all the revelations of the last five years? Above all: Would people trust Zuckerberg to build a new (virtual) reality that was safe for both its individual users and society at large?

Haugen, of course, is the former Facebook employee who leaked tens of thousands of pages of company documents to the U.S. authorities and the press this fall. The documents showed that Facebook—which renamed itself in the wake of the revelations—knew far more about the harms of its products, especially Facebook and Instagram, than it ever let on in public.

When I asked her about the metaverse, Haugen’s answer focused on the extra forms of surveillance that would be necessary for any meaningful kind of metaverse experience. “I am worried that if companies become metaverse companies, individuals won’t get to consent anymore on whether or not to have Facebook’s sensors—their microphones in their homes,” Haugen told me. “This company—which has already shown it lies to us whenever it’s in its own interests—we’re supposed to put cameras and microphones for them in our homes?” she said.