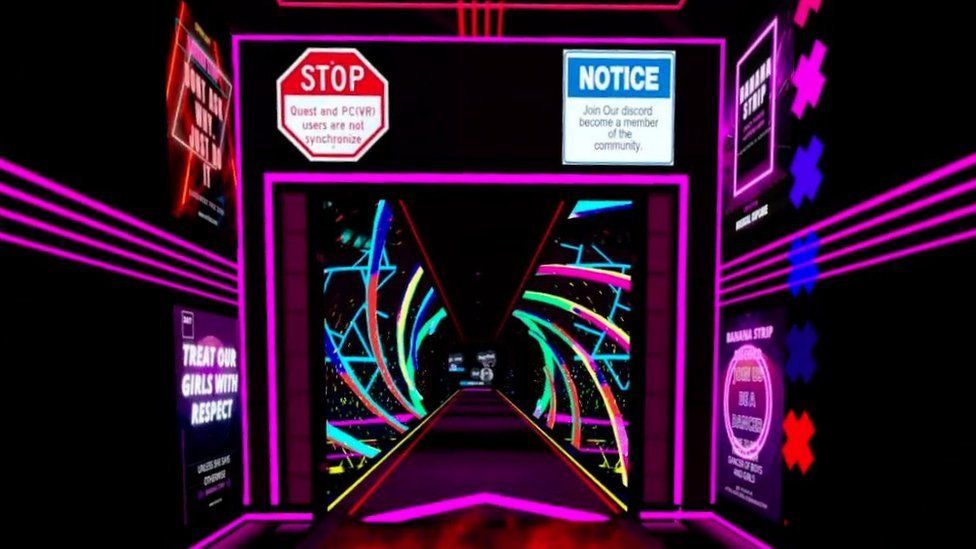 Some apps in the virtual-reality metaverse are “dangerous by design”, the NSPCC has warned in response to a BBC News investigation.

A researcher posing as a 13-year-old girl witnessed grooming, sexual material, racist insults and a rape threat in the virtual-reality world.

The children’s charity said it was “shocked and angry” at the findings.

The BBC News researcher – using an app with a minimum age rating of 13 – visited virtual-reality rooms where avatars were simulating sex. She was shown sex toys and condoms, and approached by numerous adult men.

The metaverse is the name given to games and experiences accessed by people wearing virtual reality headsets. The technology, previously confined to gaming, could be adapted for use in many other areas – from work to play, concerts to cinema trips.

Mark Zuckerberg thinks it could be the future of the internet – so much so, he recently rebranded Facebook as Meta, with the company investing billions developing its Oculus Quest headset.

That headset – now rebranded the Meta Quest – is thought to have as much as 75% of the market share. It was one of these headsets which the BBC News researcher used to explore an app, and part of the metaverse. The app, called VRChat, is an online virtual platform which users can explore with 3D avatars.

While it is not made by Facebook, it can be downloaded from an app store on Facebook’s Meta Quest headset, with no age verification checks – the only requirement being a Facebook account.

The BBC News researcher created a fake profile to set up her account – and her real identity was not checked.