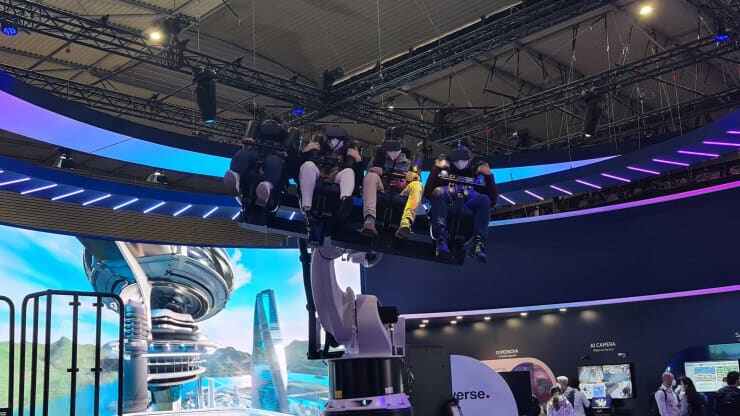 BARCELONA — Mobile World Congress made a big comeback this year — but the term on everyone’s lips wasn’t “smartphones” or “5G.”

Instead, it was the “metaverse,” a vague concept used to describe vast digital worlds in which users can work, play games or even party.

The term has been the talk of the tech world ever since Facebook changed its name to Meta, a rebrand largely aimed at drumming up hype for Mark Zuckerberg’s vision for the virtual universe.

And at MWC, the world’s biggest trade show for the mobile phone industry, the word was repeatedly dropped into keynote speeches and splashed across exhibition stands.

“The metaverse is the buzzword of the moment,” CCS Insight Chief Analyst Ben Wood told CNBC at the show, stressing that it’s still quite a nebulous term.

But if the metaverse is already a hazy concept, things seemed to get even less clear at MWC.

South Korean firm SK Telecom had a “4D Metaverse” ride at its booth throughout the week. Attendees sat down on the ride and wore virtual reality headsets. They were then lifted up and carried around a digital representation of space.

The catch? It was just another variation of the same “4D VR” rides companies like Samsung have showed off at MWC in previous years. In fact, many of the metaverse experiences at MWC were VR-based.

At HTC’s stand, visitors were invited to put on the Taiwanese company’s Vive headsets and walk around a virtual museum. They could also walk around in a small pen while exploring a desert landscape in VR.

Over on the Qualcomm booth, you could get cooking lessons or swat giant 3D insects. Orange was inviting people to climb the Notre-Dame Cathedral in VR with Meta’s Oculus Quest 2 headset.