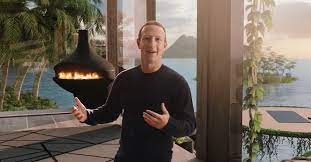 It’s the next big breakthrough in technology. It’s a joke. It’s a marketing strategy. It’s a techno-dystopian nightmare. It’s the metaverse — defined most simply as a virtual world where people can socialize, work, and play — and Facebook’s CEO Mark Zuckerberg believes it is the future of the internet and of his trillion-dollar company.

Although “metaverse” became a buzzword after Facebook changed its company name to “Meta” last month, many people are still trying to understand what exactly the metaverse is and whether the futuristic technological concept is something they should take seriously.

Many critics and skeptics have mocked Zuckerberg’s plan to change Facebook from a social media company to a metaverse company. Some critics say that by focusing on the metaverse and renaming itself while the company is reeling from a PR crisis, Facebook is distracting from the problems it creates or contributes to in the real world: issues like harming teens’ mental health, facilitating the spread of disinformation, and fueling political polarization.

Even some of Facebook’s own employees, according to internal company communications viewed by Recode, are concerned about the metaverse — as reflected by questions several employees asked ahead of a weekly staff Q&A on Facebook’s internal communications platform, Workplace. One question, which was highly upvoted by employees, was, “How could we avoid a dystopian reality, where the metaverse is used as an ‘opium for the masses?’” Another highly ranked question asked, “How will we meaningfully put safety, integrity, and responsibility first in the Metaverse? We barely are able to cover the real world today.”

Other observers have noted that Facebook’s metaverse idea isn’t new — plenty of other companies, like Roblox, Nvidia, and Microsoft, have also been building out virtual worlds with virtual or augmented reality tech. And others point to how undeveloped the technology is — in the version of the metaverse that Facebook has built so far, the digital avatars it offers as stand-ins for our physical bodies are cartoonish, awkward, and often legless.